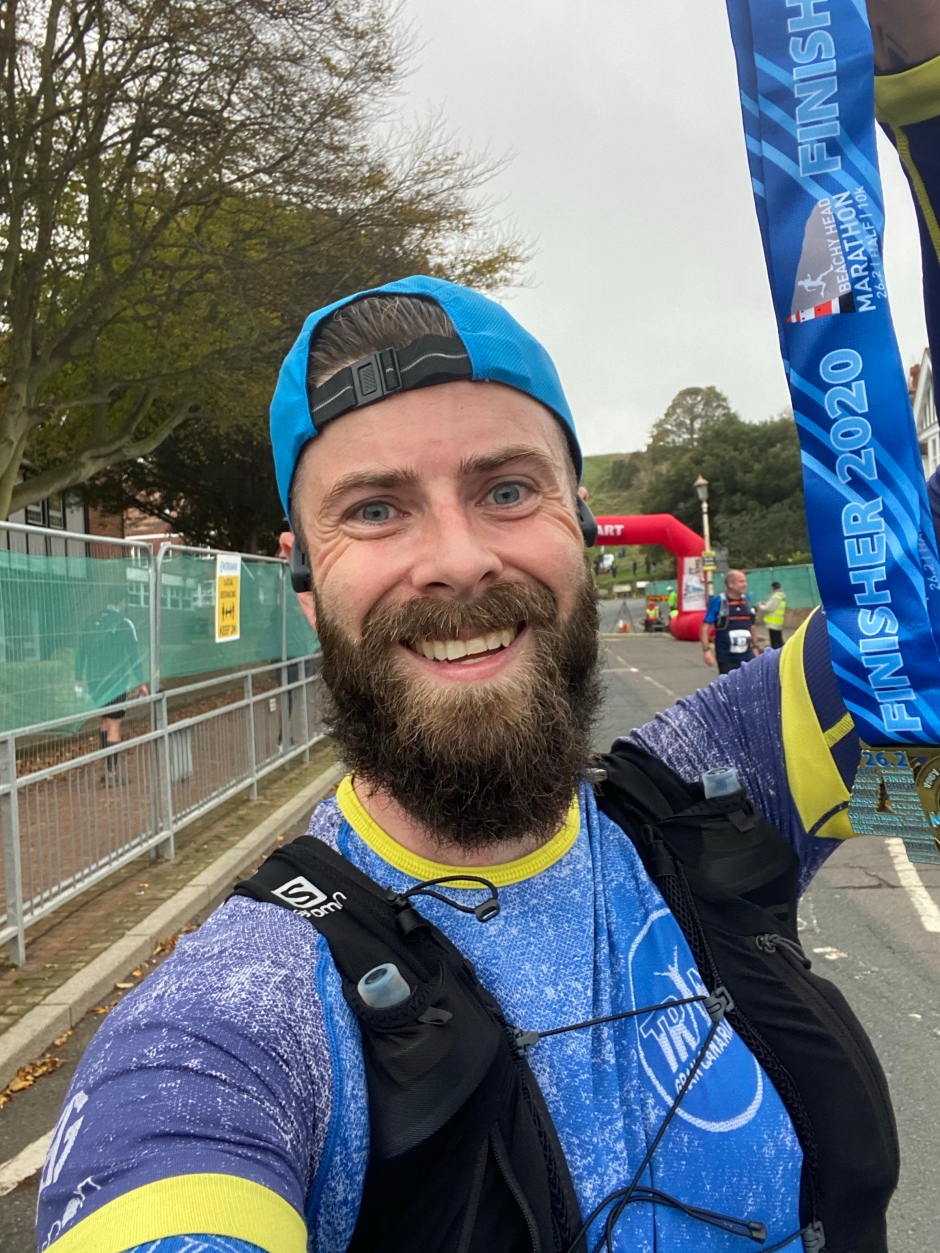 It is the 24th October 2020. I’m running the Beachy Head Marathon along England’s South East coast starting and finishing in Eastbourne. As I am running, I’m also reflecting on my trail-running journey as, back on the 30th December 2017, this is the route I ran when I tagged along for my first social/group run. In some ways, this is where my journey began.

It was after the Never Stop London Christmas party when Jana told me that her and some friends would be going for a group run after Christmas and that I should join. So I did. I joined them on the way down to Eastbourne and, little did I know back then, we ran the Beachy Head Marathon route. The intention was to do the whole thing, all 26 miles of it. But, as we reached Exceat, after 20 miles, with it then becoming very dark, we decided to skip the last few miles along the Seven Sisters and jumped on a bus back to Eastbourne and then home.

That day was a baptism for me on the trails. Whilst I had completed 3 trail runs in 2017, all were at events. This was my first social run, the first time being unsupported without checkpoints and it ended up being the beginning of something special (I didn’t realise this at the time). I remember it was tough. I had the essential kit but I was probably not quite prepared for the day and the elements ahead. I remember early on I slid in the mud and landed side-on in a muddy puddle. I recall the open hillside tracks with the rain and the wind battering our faces – we couldn’t hear each other talking and ran a lot of it in apparent silence. It was the first time I’d met many of those I ran with that day and it was the first of many, many, runs with them and the mighty Gwyn (Susana’s dog). On the bus back to Eastbourne Susana gave us all a medal she’d made. I’m fortunate to call many of them friends now. I loved it all. Now, almost 3 years later, I was back on the Beachy Head route, for the Beachy Head Marathon in its 40th year. My trail running journey continues!

I knew a few people running the route that day. I didn’t expect to see any of them with the social distancing restrictions put in place. To my surprise though, just a few minutes in I ran into Megan who I travelled Borneo with. We caught up as we ran probably about half of the route together. It was great to see here again and especially nice after seeing some of the others from Borneo a few weeks earlier.

Rather than the usual ramblings of how the run went, instead I’ve summarised what the Beachy Head Marathon is and what you can expect if you decide to take on this fantastic event (which you should!)….

What is the Beachy Head Marathon?

It is a trail marathon which means it follows a mostly off road route. It has been taking place every year since 1981 and is a very popular event attracting runners from all over the UK.

The marathon is a strange sort of loop shape (kinda looks like an animal of some sort), starting and finishing on the edge of Eastbourne. Mostly it follows the South Downs Way as you first run towards the village of Jevington, and then continue on through and past Alfriston. When you reach the lookout point at Bo Beep Carpark, you begin to track back towards Eastbourne passing through Litlington and down to the coast via Westdean and Exceat. Once you leave Exceat you follow the undulating coastal trails of the Seven Sisters all the way to the Birling Gap and finally up to ‘Beachy Head’ and back to where it all began.

In short, it is a good one. Whether you’re a first time marathoner, first time trail runner or seasoned addict, get the Beachy Head Marathon on your to do list and have some fun!