WHY I RAN THIS COURSE:

No particular reason other than I hadn’t been to Malta and I needed a marathon in February. I didn’t do any research but I wish I did. I might have been able to visit something like the Hypogeum if I’d planned in advance.

The course is not a city marathon. starting in the hills of Mdina you run through the countryside, downhill towards the capital Valletta before finishing up in the marina of Sliema.

It’s a simple one. Registration was straight forward and the website informative. There was little correspondence from the MMOC (Malta Marathon Organising Committee) other than a reminder a few days before the race to “follow the rules”. Bib collection was available the day before (a good thing!) and the collection straightforward (although I went back 20 mins later after ripping my plastic kit bag and the queues were suddenly huge!). Everything went as expected.

Pretty much none. I’m getting this from the smaller, overseas marathons.

It’s another run, another new place, another early morning. There’s organised transport from Sliema (where the marathon finishes) to Mdina (where it shall begin). It leaves at 6am. Aaargh. The night before I’d scoped out the walk. I’ve got a fairly decent night’s sleep and it’s now 4am and I’m getting up. The hotel I’m staying at doesn’t have much in the way of room facilities but there is a coffee machine in the lobby. The night watch man grunts as I get that early caffeine fix in. Arriving at the marina there starts to form a gathering of runners (what’s the collective for a group of runners? Just runners?). No one really knows where the buses will be so I walk up and down, taking in the marina in the dark. A short ride later and we arrive at Mdina. We have well over an hour to wait till the start. But, there’s a treat in store – I spend the majority of the time walking the streets of the walled town. Taking in the sunrise from the hills. Not a bad start to the day! 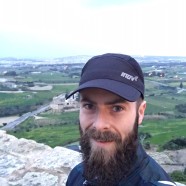 Before I know it we are off. The marathon is underway and we start running The route winding through the Maltese countryside. The potholed roads (think running in the shit parts of Lambeth) are mostly lined with Stone walls and for the early parts of the race we are treated to the beautiful morning views of Mdina.

The race hasn’t the luxury of Closed roads but, there was only one occasion where this was a problem when, a few km in, a parked car pulled out and decided to try to drive through all the runners. Knobs head Other than that my experience was good. It was Well traffic-marshalled and later parts of the course had a coned off section/lane for the race.

I wasn’t sure how to approach this race. It was meaningless to me for a start. The second race in my challenge. Here on my own. My mind looking at future races. I had little incentive. Once again I thought of taking it easy. But the trouble is I now know from Muscat what I’m capable of. What I can run. And I’m also very competitive with myself. I can’t dial that back. So off I went again with the crowd when the race director said “go”. Starting out I was feeling strong and I felt that the race was fast with a speedy field of runners. Immediately I was faster than Muscat. It was happening again, immediately I started to form a race strategy.

My run plan had become – keep the fast sub-7min mile pace until 10miles. Then adapt. I soon changed this to the keeping the same pace for the first half. The adaption this time was followed by the approach of “if I’m struggling to sustain the pace or if I’m finding the pace is difficult then drop it” give myself some breathing space by lowering the pace slightly and sustain that instead. So mile 13 I did just that. I looked to slow to a more comfortable 7.20min mile pace which I promised I’d aim to keep till mile 21. Then like Muscat, anything goes. The hard work would be done. Bring it home.

The majority of the first 10 miles was downhill. Then there was a short bit steep incline around that was soon followed by a longer gradual climb. These were pace sappers. I was fighting a little to keep the pace at this point. 13 miles was my target though. 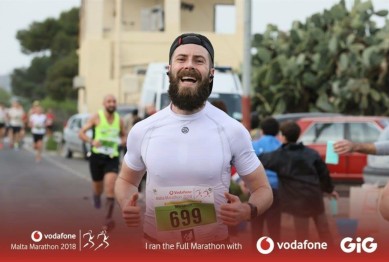 Other than those the majority of the first half to 3/4 turned out to be downhill (obviously I knew ethos from the elevation chart, but, it’s difficult to visualise a chart in reality!).Downhills look and sound easy but By mile 17 mile quads were lit. There was burning and pain. I kept going.

Mile 20 had a little surprise in store for us – a steep bridge over a main road. It was the first but not the last. Most of the last 6 miles of the course had these little ups and downs. They were tough. I slowed my pace as promised. 8 min miles were mine. Smile and enjoy what I could.

Around miles 22-23 I started to be overtaken by a lot of people. I was hoping these were just the half marathoners but there were definitely faces I recognised from earlier. This wasn’t a fun feeling. I was running faster than ever before. Perhaps that race strategy isn’t the way afterall.

Up and down we went, round and round the twisty coastal roads. As we hit the capital – Valletta – we looper round the bays and coastal roads. On the other side I could soon see the finishing arc. 2km remaining. Here we go, Sliema here I come.

Up until Sliema there was pretty much no support. But, the finishing mile had brought the public out in their masses. A great last boost. Including huge screams from the lovely lady working at the Ta’ Kris restaurant I visited the night before (highly recommend by the way. So busy they were constantly turning people away!). I wish I’d left her more of a tip now.

It’s the final stretch and I’m ushered into the wrong finish and had a picture with a rapid Half marathon time instead. Doh.

Getting my medal I glanced back and saw the clock on the other side was saying 3:03. I was shocked. But it was goodies time. That can wait till later.

Immediately after the water I queued for a free leg rub. Lovely. Fucking hurt like hell. I didn’t enjoy that.

Then I queued for a photo with my estimated finish time which my watch had confirmed was just under 3:03. Suhweeeet.

It’s great that the marathon includes free photos to social media and a free rub. You can’t argue with that. It was chaotic though. It was all too close to the finish and a bit packed as the thousands of runners started finishing.

The free T-Shirt is great and has similarities to the National footy kit!

All in all a highly recommend race. It’s not a city marathon so is very scenic. It’s a Beautiful route that is Fast, hilly and Tough. It’s Well organised and Cheap compared to most.

As I was running Malta something felt different. I felt for the first time I was more in tune with my run, more Aware of my body. Whilst enjoying the surroundings (see pic of me absorbing it) I could sense when I was slacking. When I was ready to slow. My brain was easily able to translate the messages to my body. It felt good. I’m going to try and explain in another post. I also felt better at reacting to check points and water stations. Something I’ve never been efficient at. Maybe one part of it is that I also avoided checking my time. I kept monitoring my pace but no pressures of time. And didn’t attempt to calculate it. So i knew I was running strong. Just without the pressure of expectations.

I entered the run with a clouded mind of emotions and thoughts that had lingered for a few weeks and made me a grumpy sod for no apparent reason. The long run worked its magic though and now I can’t remember those thoughts or stresses and the freedom running gives me has once again delivered. 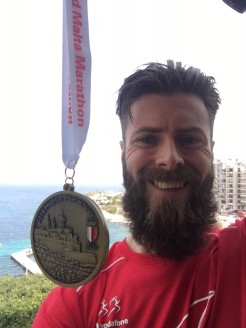 T-shirt, Medal, Massage, Photos. What more could you want? The medal is pretty big but features Mdina. It’s alright.