The Samoens Tour du Giffre. A 33km mountain race in the Alps with a little over 2,000m of elevation gain. One of a number of races on the weekend including a monster 90km  (6,500m D+!!) and a VK over a 2km distance. Jana talked me into this one. I didn’t want too initially (I had enough events in the calendar already). But I’m so glad it did. It turned into a trail runners equivalent of a “slumber party”. The plan was simply to eat our body weight in food, run the trails and cheer our hearts out to all the runners out there and have a wickedly excellent time…

11 (and a half!) of us rocked up on the Friday, wandered the little town of Samoens aimlessly (searching for ice cream and enjoying a little public gardens area with a waterfall) before registering at the race village and heading to our chalet up in the mountains to relax. Katie took charge in the kitchen and bossed up a wicked risotto dish before we all eventually passed out from the days travels.

Come 7:30am the next day we had joined the crowd in the town centre for the start and were soon speeding through the manic stampede along the streets. There were no game plans. No agreements to run together nor race. All just out there doing our thing and enjoying the trails. We were racing though in the initial pack of starters, an early glance at the watch noted a near 7min mile pace for the first km. Yikes. Thankfully though this was soon stopped as we hit the trail and the immediate bottleneck of the first climb. 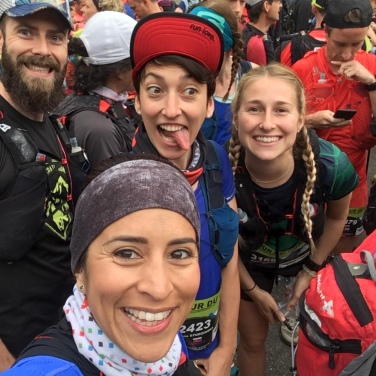 For the next 7 or so kilometres we’d be heading up. Up into the clouds. As always on these sorts of races the poles came out. Humans transformed into 4 legged monsters stabbing and probing at everything around them. Each other included. It felt unnecessary. The elevation chart didn’t look ‘that bad’. We’d all opted for the no pole strategy. There should be some sort of rule on mass events that poles aren’t allowed until a certain point, quite frankly they are dangerous in the wrong hands in crowded areas. And most runners seem to be the ‘wrong hands’ incapable of using them properly. Anyway…

We climbed and climbed and I began sweating more and more. They’d predicted thunderstorms, yet we were treated to glorious sunshine throughout (the thunderstorm did arrive later that night, and I believe to fatal consequences in some parts of the region! The 90km was terminated as a result of the storms too!). I was just happy to settle into a nice relaxed rhythm and enjoy the run.

After a little while I went by Maggie, then Jana and Katie. Towards the summit I could see Rachel and Bucky up ahead too. Each time I caught up with one of them we’d chat briefly and carry on. There was then a shortish downhill section, where Rachel and Bucky sped off into the distance, and I was being taken over constantly. Tens of runners sped past. It was very runnable. I was amazed how fast people were going. Whilst I’m not the most confident nor comfortable running descents, this was quick. Again a glance at the watch noted sub 8 min miles. Speedy for a trail!

A shout cane out ahead, Sarina was there cheering and supporting in the forest as we approached he first aid station (her run was not until Sunday morning). Heading into the aid station (after crossing a temporary scaffold bridge over a main road) I refilled my water (I’d opted for a single Tailwind sachet for this race and Hi-Five electrolyte tabs I bought last year and were soon to expire) and started ploughing into the picnic spread. Salami, cheese and fist fulls of orange slices to start off with (there were two more aid stations later on the route). Katie and Jana came through and carried on, barely stopping to breathe.

Afterwards the down hill continued. A brief flat section broke into some fields and Jana and Katie were up ahead. Jana stopped and waited for me and we continued together before Jana ushered Katie on at her own speed (she’s pretty fucking fast!!) who was like a puppy let off a leash (she’d ran the rest of the route lightening quick and finished well under the 5 hour mark!).

As Jana and I continued, we crossed a little bridge over the river before running another flat section alongside the river which was a very root-laden path. Jana remembered it from her solo adventure in the Alps last summer. She swore at the recollection of the hills we’d soon have to climb. And soon I joined her in the swearing as we started the climb.

Jana and I had a good ol’ chin wag as we climbed. We weren’t quiet. Laughing and joking and catching up on life since we last saw each other back in October at the Lemkowyna trail. We had a lot to talk about and several runners commented as we powered past them. They couldn’t understand how we could talk and climb so quickly. Looking back, it took my mind off the climb and made it pass fairly quickly. We we soon behind Bucky and Rachel again as we hit the second aid station. Jana patiently waited as I grabbed more food and liquid before we continued again. Soon we climbed as a foursome before the summit broke us once more. As we ran down Jana vanished into the distance and I began running with Rachel for quite some time.

We ran through several streams of water which were absolute bliss. Cold wet and soothing on the sore feet and ankles. I dipped my hat into each to cool down. Annoyingly though the rapid descents and wet feet didn’t agree with one another. As my feet rammed forward and my toes crunched to brake my speed, the insoles of the shoes broke free and bunched up under my feet. They slipped both under my heel and under my toes. It was horrible. As we hit the bottom I had to stop and refit each insole. As I did so I was greeted with cramp in the quads. Great. It’s been a while since I cramped. I wondered if having less Tailwind (and it’s sodium!) was to blame?! Several more times I had to stop again and repeat the process.

I was climbing again though and soon caught up with Rachel once more. The last of the ‘big’ climbs was mostly uneventful but one section was stunning as we crossed a water fall that had frozen solid and the race volunteers had ‘dug out’ a path through for the runners and we were encouraged to go slowly and carefully. Eventually the summit was reached. The vast opening at the top of a ski slope and the ski lifts. There were cows all around and Rachel ploughed on ahead despite her phobia. Some coke and more oranges at the aid station was enough for me this time as we’d begin the last 7 or so kilometres back into town. All good…

Only it wasn’t all that good. It was steep. Very steep initially. And very wet and muddy. It was harsh on the feet and legs and felt very dangerous in parts as we slipped all over the place. We’d constantly slow and let other runners past. Rachel’s knee was hurting from the descent and my feet and ankles giving my now ‘normal’ pains. The swearing and groaning was very verbal at this point. Thankfully it eventually ended but there was a small (relatively!) climb to now navigate. As soon as I hit it, I cramped up badly in both legs. I came to a hobble before loosening up enough to run after Rachel again. Rachel kept pulling up with her knee and encouraging me on. She was always near though and is such a strong runner, even when in pain! We ran past Sarina again a few km from the end, only she was now with Maggie?! Something had happened and Maggie had retired from the race. She confirmed she was all OK though as I ran past.

Some more forest paths saw many runners zip past us before we hit some tarmac roads and switchbacks and cut several of them with shortcuts down the trails. We arrived at the bottom and the sound of the river hit me before I saw it. It couldn’t be far now as we were back at ‘ground level’.

The path led along side the river, passing a campsite and then the lake and fields of the finish line (familiar as it is where we collected our bibs the day before) became visible to my right, on the other side of the river. A bridge up ahead, I prayed we’d cross over it. we didn’t! We were taking the long way around the lake. Dammit. I was still so hot and sweaty and ready to finish. I didn’t know how far it was, a kilometre at least for sure. It felt like longer before I eventually lined up with the finish line. The big surprise was seeing Dorota as I rounded the bend, whom I had the pleasure of running a good section of the Brecon Beacons Ultra With last year. Then further on, Ben, Jana, Katie, Maggie, Sarina and Chris all brought the noise as I ‘high-kneed’ it across the line. As I stopped the cramp hit again.

Medal grabbed I hobbled into the refreshment area just as Rachel was finishing. We hugged a sweat fest of a hug before joining the others just in time to see Bucky cross the line. We all joined the party to cheer home Yvette and Kasia and several of Jana’s friendstoo. We hung around in the sun for a few hours (with one beer that made me very sleepy!) before heading back to the chalet for pizza and booze, just in time to beat the thunderstorm 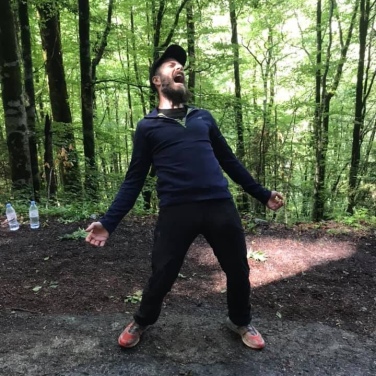 The next morning we woke to repay the support. It was Sarina’s time to run and we all headed out to see her off, get pastries, and then travel the course to cheer her. After some navigational mishaps we rocked up just before he first aid station where Sarina first saw us the day before. We made our home on a section of road splitting through a down hill section of the trail. We whooped and cheered all the runners coming down and were then greeted by runners coming up the hill where we’d driven – the 12km run was joining the 18km run at this intersection. I don’t know how long we were there for but I know we had the best of times. The noise we made was visibly appreciated by the majority. Dorota came up and passed on her 12km run then, to the greatest of noise  we could make, Sarina appeared. Smiling and bounding down the path. After she passed we bundled back into the car and found the road just after the aid station. The same point on a bridge the day before where Jana waited for me and sent Katie on ahead. Sarina soon appeared again and would run from here along the river back to the finish. We headed there to wait and then brought the noise as she arrived. Group hugs all around. This was one hell of a party and one we were all sad to bring to an end and head to the airport.