As we munched down on the juicy slices of orange I’d been carrying for the last 4 hours, we discussed it’s place in a trail runners hierarchy of desires. It slotted into the top three above oral sex and a foot massage. Momentarily we were in juicy orange heaven.

The day had been a proper picnic for me. Lou, Elisa and I were running the Three Forts Challenge (they claim its a challenge not a marathon as its 27 miles) and the organisation was superb. There were a ridiculous amount of checkpoints for a marathon distance (11 I think!) and whilst not the biggest or most stocked of checkpoints, they provide ample opportunity for snacking on sugary sweets, savoury biscuits, cake and chocolate. There were times Elisa and Lou had to shout to get me moving again! Whilst I knew about the checkpoints in advance, it didn’t stop me over-preparing with my own snacks and thus the oranges were hauled around the trails of the South Downs until they were squishy and warm. Regardless, they were special when the time came to indulge. I do love a good juicy orange slice on the trails.

Right, enough tantalising of the Vitamin C, lets rewind a little and put some context on this race. This challenge was a week after my epic adventure in Madeira – the 115km Madeira Island Ultra Trail. Why was I running another marathon so soon? The old case of fear of missing out. It hit me hard. I knew a number of people heading down to Worthing for this race and I wanted in. That and it was very cheap for an ‘ultra’ (£40!) and the route went along parts of the South Downs I hadn’t run on before. This is a big factor for me at the moment – exploring new places. So, pre MIUT I signed up knowing that if anything went wrong in the lead up I hadn’t lost out and the plan was to enjoy the day as a recovery run. It was also a bank holiday weekend, so why not?!

I knew Lou and Elisa were preparing for their own epic adventure of the London to Brighton trail race so I’d persuaded them to let me tag along for the day with them. Whilst they were staying for the weekend near the start line, I joined a few others on a 6am train out of London. It was painful. Running really has brought early mornings to my life! Walking from the station to the starting village we bumped into Lou and Elisa on the way. Such convenient timing. As we hung about waiting for the race to start we came across more and more faces we knew, dropped off our bags (conveniently the start and finish were in the same place) and soon we were off on our way.

Initially there were some single track paths and a little bit of jostling for space, but soon the space came and the first of many many hills paid us a greeting. We’d agreed (non-verbally) that we’d be walking all those damn hills. We had a cut-off of 6 hrs to complete the race and I was more than confident that this was highly achievable. Walking would be our friend! Naturally, with hills come great views and we were soon snapping away at each other and enjoying the fantastic early morning scenery on offer. Before we knew it we were passing through the first of the many checkpoints. 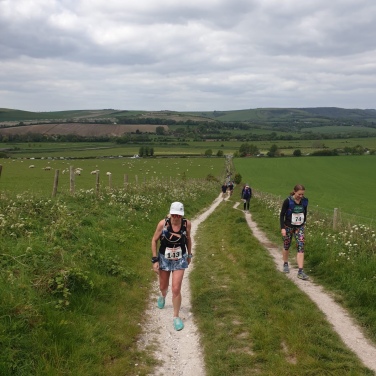 It quickly became apparent how well organised the event was. there were several points along the route were we’d cross roads or intersecting paths and, besides at the checkpoints, there were volunteers and marshals everywhere! Besides the various local running clubs that support the event, there were also volunteers from many of the local Rotary Clubs too. They were all so cheery, chatty and supportive and it really makes a difference when you’re out pushing yourself through endurance challenges.

The miles came and went and my belly was filling up with cake and jelly babies. We’d climbed several more hills and were now on a section of the route that saw us running towards Devils Dyke where we’d eventually turn around and retrace our steps before heading off in a different direction and looping back to the finish. As we reached the top of a long climb and started descending, we began to see runners heading towards us. The race leaders. We whooped and cheered them through and quickly developed our favourites for who we wanted to win – it was those runners who were conscious enough to return an acknowledgement. It doesn’t take much. A smile, a look even. I do get a little wound up by how ignorant some runners can be, even when you are pushing yourself to your limits you can muster a smile at least. It became a game for us. Cheering and supporting the runners louder and louder and mocking some as they passed “quick, grey shirt dude is catching you!”. We had fun at least. As the numbers increased we took turns amusing each other by cheering alternative runners passed.

The larger hills at this section went by easily as we were having such a laugh. We hit the turnaround point at Devils Dyke and continued our game as we cheered through those runners at the back of the pack. As we neared the checkpoint at the Hostel we came across Gemma. She was out on her own battling her demons with such a positive and cheery outlook. Hugs exchanged, we carried on with a brief stop at the Hostel where I got comfortable chatting to the volunteers and ramming chocolate brownie and pretzels into my gob. Delicious!

We were over half way through by this point and the only thing of concern was Elisa’s knee. She’d been acknowledging a high level of pain for quite some time, only intermittently forgotten about when her fingers swelled to the size of some chubby sausages which caused us endless amusement. Elisa powered on, determined to overcome the pain. Soon, after passing back along side a quarry we’d seen earlier, we headed further inland away from the coast which seemed so near yet so far. We started passing more runners in the other direction whom we initially mistook for participants in the race. We realised though they were doing another – the XRNG Devils Challenge which is a 100 mile 3 day event along the South Downs. The runners, despite being on day two of their challenge, were all so upbeat and we exchanged good wishes for our respective races.

As you run trail events and longer distances, you start to become accustomed to the awful stench you produce. Be that the sweat and and odour of the body or the many gases seeping their way out of your body however they can. I most admit though, something didn’t smell right. It smelt awful. I wasn’t sure if it was me or them. I was hoping it was neither. “Pig Farm!!” Lou screamed out. I sighed a small sigh of relief. That explained everything. Pigs everywhere. Honking and squealing they looked at us like we were crazy. I looked at them like I was hungry! Baby pig Pig Pig Pig Pig, Baby pig pig pig…. all day long I’d had the Baby Shark song stuck in my head and couldn’t stop singing it every time we passed a baby animal – cow, sheep and now pigs! Irritating on so many levels.

Further on from the pigs, at one of the highest parts of the course, we passed fishermen. In a field. A field of grass. No water. Were we hallucinating? where we lost? Something wasn’t right. All the runners near us were thinking the same and we all laughed at the weirdness of it as we watched them throw their lines into the lush green fields. What the fuck?! It turns out it was some form of competition for throwing your line out – whatever that is called. Casting? We were amused anyway.

We continued chatting away to each other and with other runners around us also enjoying the day, like ourselves, as a training run for something else. We exchanged stories of challenges to come and what lay ahead. There are some incredible people out there! After a while as we began to spread out again we noticed we were continually near one older gentleman. The ‘Noisy Man’ as we came to affectionately know him. Everything about him was noisy – the heavy breathing, the funny noises he’d occasionally make and heavy stamping feet. We wanted away from him but found we spent the rest of the day leapfrogging each other (mostly as we’d stop and enjoy the treats at the aid stations, or ‘having a dinner party’ as he commented!).

Before we knew it, we were approaching mile 21. The checkpoint was conveniently placed on top of a hill. One with a picturesque view though. At the top of the hill, in a green pastured field, was a small cluster of trees. It was quite a sight. We stopped and took photos and had a mini photo-shoot with the mile marker before carrying on. Elisa’s Knee was causing more pain but she was full of dedication and sheer determination to see it through, regardless what she felt. He mental strength is quite inspiring. All the while I ate more and more food and remembered the oranges! Soon would be their time. Lou on the other hand, despite being a constant moaner, was full of positivity and drove the conversations, making us laugh and take our mind off the route which was quite hard and rocky terrain for the most part). I think she is a far stronger runner than she gives herself credit for, especially given her injury setbacks over recent years. 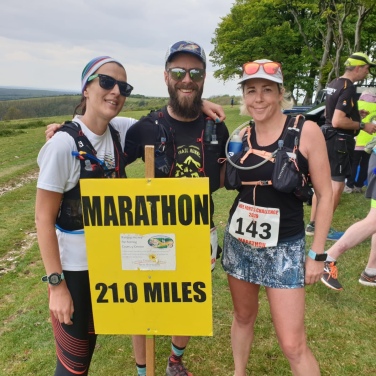 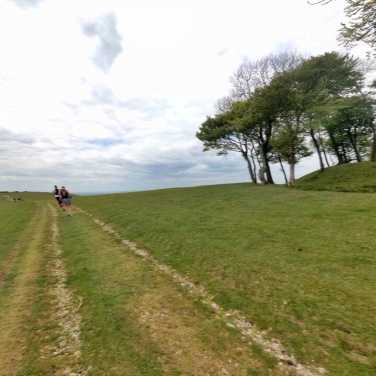 The remainder of the course was more down hill with the last undulating hills which we smaller by comparison of the early ones. With a few km left to go we started to run downhill run towards the start, retracing the initial part of the route. Other than a few close calls where toes were stubbed and falls almost had, this felt like a breeze in comparison. We rounded the last turn, squeezing past some runners before crossing the finish line together. I think it was about 5hrs 30mins on the clock, well within the cut off time. We collected our medals, hi-fived our friends already finished and I head straight back the the food stand to get cakes and more biscuits. I loved it.

We were handed the most high-vis of all high-visibility garments you can imagine. Some last photos and hugs and we said our goodbyes. As the pair headed off home, I went back to the finish line and joined the others in waiting for the legend that is Arlene to finish. As she appeared in the distance and our support increased in volume, Jakub took the Town Crier’s bell and ‘rang’ her home. It was hilarious when he handed her this massive (heavy!) bell and little Arlene almost buckled under the weight of it! We were done. Time to begin the long and tiring journey back to London… 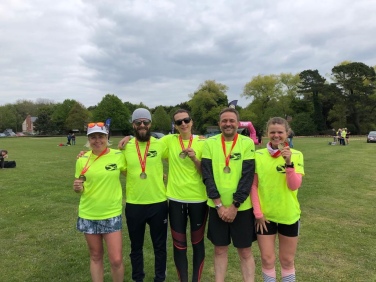 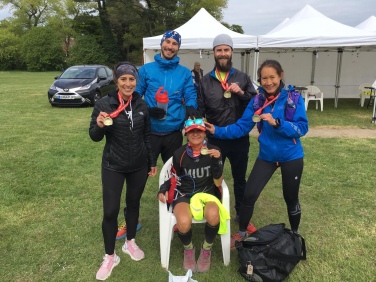