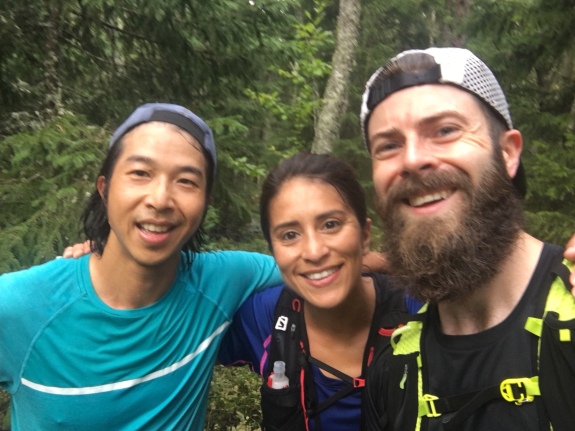 T’was the day before The CCC and all about Chamonix runners stirred and shifted in their trainers. The nerves, the excitement and general apprehension made for the perfect ambiance against the mountainous back drop. I was there for the CCC. Alan for the UTMB. Yvette for the crewing.

Before leaving London, amongst all his advice, there was an offer from Alan of a “shake out” run the day before my race. I was cautious. I don’t normally run before a race. Especially not running in the mountains. But Alan knows his stuff.

We woke early and met by the finishers arc. Hopefully we’d all be reunited here again in a few days times. The weather was crisp and cool with a misty grey sky. Alan adapted his plans and led us on a run out to Les Tines

On the whole it was flat with a small climb about midway through (about 700ft). Running back down through the forest paths I slipped on a rock. Nothing bad at all. A wake up call though. Pay attention!

Alan later down some more knowledge on me and tips for the race. He was right too. I started feeling good. My body and legs lightened as I shock out the travel fatigue. I didn’t realise, but I needed this run.