It’s the start or the Serpent Trail 100km event. I’ve dabbed the timing chip in at the start. Of the smallish (50+) crowd I’m pretty much at the back. Through that first gate and off I go. As I make my way past a few runners there comes a call. A lady has recognised me and grabbed my attention. We start chatting and I find she is called Ally, we have a mutual friend – Jon. She recognised me from an Instagram post he made wishing us happy trails.

The conversation soon becomes a back and forth “so you know…”, “you’ve met…”, “ you run with…” as the web of connections unfolds. We continue chatting about each other and inevitably running. Us runners love to talk about running!

The more we chat, the more commonalities we discover, none greater than the fact we live just a few streets a part! Ally drove down to the event in the early hours (the bus to the start left at 5am!!) and was planning on driving home afterwards. We had similar aims to finish the race and she kindly offered me a lift home. A lift many hours later I was very glad to have accepted!

We joked at one point how comfortable you get running with other people, that the miles tick by quickly. Shortly afterwards we acknowledged the complacency this brings – we’d missed a turn somewhere and were off course! Doh. A brief exchange with some others (who maybe followed us?) and we were back on course.

Some good 12-13 miles later we decided to part company and stick to our own plans. The one promise we made was to not get lost. I broke that almost immediately and caught up with Ally probably 20 mins or so later. Idiot.

The rest of the run you can read in my review or over on Ally’s excellent blog.

We were reunited many many hours later at the finish as I waited her arrival. How she drove home after such and adventure I will never know.

What I do know is we shall meet again. We shall explore some local trails and run some more. Another exceptional encounter on the trails! 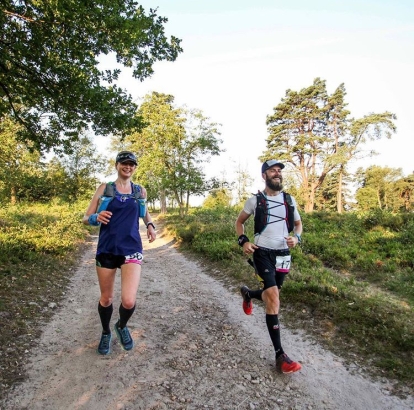