I’m not quite sure where the memory came from. One minute we are running along. The next I’m singing ‘Ultra Nick’ to the tune of Earthworm Jim. Nick recognised it straight away…

Saturday was full of memories and sharing. It was the Hurtwood 50. A local-ish and increasingly popular ultra marathon in the Surrey hills brilliantly run by Freedom Racing. This was Nick’s first ultra. Like his first marathon in Luxembourg just 6 months ago, I was stoked to be at his side. I love running with people and supporting them through such achievements.

A few weeks ago we ran in the Surrey Hills and Daryl who I met during the TDS joined us. It turns out that Daryl and Nick went to the same school and a few hours later we’d roped Daryl in to joining us at the Hurtwood also.

On the morning as we travelled down to Dorking, Jorge messaged to say he’d be at the start. He was combining his training with supporting us too. What a guy! Always so thoughtful and generous with his time. We rock up at the leisure centre and meet Jorge in the registration queue when some fella wanders over. Excitedly he proclaims “I’ve had a hair cut”! Bloody hell. It’s Daryl, only without his shoulder length hair. He’s had it chopped off after about 8 years for charity. Hero!

We stop by Rachel who is on duty volunteering at the registration and we say our hellos to her and the many other familiar faces like Derrick and Sarah we see before we head outside to join the start. Tom, the RD, gives the race briefing and talks about the community. Immediately it’s clear the importance such an event has when, after asking “hands up if this is your first ultra”, Hands all around us are thrown up into the air. It’s great to see. Little did they know what they were in for – The Hurtwood route is a fairly hilly and muddy one! Rachel was in charge of sending us off and, with a few loud blasts the air horn, off we trotted.

We had no real plan for this run. A vague finish time in mind that was realistic and challenging and the same time. I think it is important not to put pressure on yourself, particular for a first time doing something new – it is daunting and hard enough without putting expectations on yourself. Instead we’d run from checkpoint to checkpoint, treating each as a little run in itself. At the Hurtwood there are two checkpoint locations. As it is an ‘out and back’ course, you visit each one twice. Fairly evenly spaced out that makes it five 10k-ish sections.

The first section heads out towards Leith Hill and the tower. A few little inclines and declines are followed by a short single track section before a much longer, steady and shallow incline. Eventually, around 12km later you reach the short but steep climb to the Tower. The largest climb on the course. Along this section, with 300 runners, it was fairly busy, but you always had plenty of space. We briefly ran with Sarah before she sped on as we stopped for cake and crisps at the checkpoint.

The next section involves a number of rolling trails as you run through various forest tracks and reach the view points at Holmbury Hill and Pitch Hill. Beautiful views across the South await at both sections. We didn’t stay long at either though as the cold December morning presented plenty of chilly winds and each time we stopped we’d get cold quickly. Daryl in particular was feeling the cold on his ears, something he hadn’t felt for 8 years! About 18km Jorge said his goodbyes and turned around to head back.  Then shortly after, at one of the car parks, we met Nick’s mum who’d once again come out to support him, just as she did in Luxembourg. It wasn’t long later that the leader (shortly followed by Second and Third place) sped past. We cheered them through.

As you reach the second check point the course splits. Here you do a loop, heading down through some stunning forest paths, lined with tall trees pointing up to the sky, before slowly climbing back towards Winterfell Woods. This section has a stint along some roads. Around this time we spent a little bit of time with Laura who I’ve followed on Instagram and always pops up at the same races. I later found out this was her 50th marathon/ultra. Half way to entry to the 100 Marathon club. What an achievement already!

Back at the second (now third!) checkpoint we scoffed more crisps and cake and joked with volunteers and runners alike. We were surprised to see some runners still arriving into the check point for the first time (including some ladies Nick recognised as teachers from his school) and I think this gave Nick a huge boost.  Along the loop section though Nick had started to feel the pains of the run (which was already one of his longest trail runs to date), especially in his ankle. He was doing far better than he probably realised. Daryl and I were confident we were sitting comfortably in the ‘middle of the pack’ somewhere.

Fresh from the refuel, and after Daryl accidentally tried to send a runner back out on a second loop,  we headed ‘back’ the way we came towards Dorking. We made some strong progress along this section and got to say hello to ‘Mum’ again too. Approaching the final checkpoint we stopped and tucked into the sandwiches the volunteers had kindly prepared. Cheese sandwiches were a welcome delight and we joked how none of us had eaten any of our own food – the spreads at each checkpoint were great (even if demand was putting pressure on the supply!). Once more we made the big climb to Leith hill and wasted no time running straight passed and down the other side. It was getting grey now and was far colder at the view point than it was earlier in the day.

As we left Leith Hill the sky turned dark and the rain began to fall. We were on the long steady decline now though and momentum was working in our favour. Despite our aches and pains we plodded on, racing the rain almost. The protection of the forest was enough to avoid us having to stop and layer up. The continuous running at this point started to take its toll on our tired legs and groans and moans became the soundtrack to our progress.

To Nick’s annoyance we weren’t yet done with the hills either. A few remained and each one increased the volume and frequency of the moaning. Variants of “fuck” were coming thick and fast and more combinations than I thought possible. I won’t even go into how his “ass hurts”. We gained several places and held off a few runners chasing us down too. Finally breaking free of the forest we arrived back into Dorking and had less than a mile to plod through the town, all slightly downhill. The volunteers ensured our safe passage across the streets as we hunted down one last runner. We got closer and closer before calling the decision to ease off. The finish was strong, but we were busting a gut now and it might have got messy at the finish if we sustained the effort any longer.

Rounding that final bend we pushed Nick forward toward that finish. Rachel, now on Medal duty, directed him in. Jorge screaming to the beat of the cow bell being rung by Nick’s Mum. Aimee cheering him in, me and Daryl whooping him on. He had his own entourage that dominated the finish line. His transformation was complete. Ultra Nick was born. 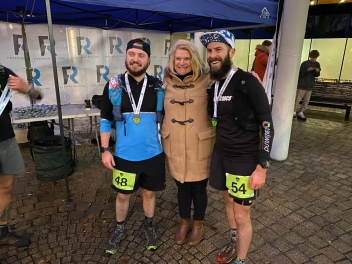 Afterwards we went to the pub. We stayed for quite a while and I for one was rather pissed when I left. I shouldn’t laugh, but one of the highlights was Jorge getting ‘egged’ as we left the pub. I heard the crack and just thought he’d stepped on an egg. But his leg was covered. I’m still laughing now. Sorry Jorge!

Whilst running the Hurtwood there were many thoughts bumping around in my mind and the conversation often revolved around experiences. First times, subsequent times. Things we’ve learnt along the way. Thanks Nick was experiencing and going through in the moment. Daryl is an experienced ultra runner and we shared many similar views and experiences about what we’ve encountered on our journeys and adventures. Be that the way people talk to us, the way we feel, the things we look forward too, the techniques we use to avoid succumbing to the pains and darkness etc. We saw some of these in Nick too. Particularly the hurt and the pain. The way he felt every change in elevation. the impact of the mud or the roots. We took joy in it. Lots of Joy. Having been there and done that, it filled us with amusement and plenty of laughter. As much as I love running and supporting people, the sadist in me also loves being there to laugh as they fall, as they moan, as they suffer. I can’t help but enjoy that too!

I started this blog saying I’m not sure where the memory of Earthworm Jim came from. What I do recall is what triggered the memory. Before the race, as motivation, and then again towards the finish line, I referred to Nick as ‘Ultra Nick’. The way I said it rhymed easily with the tune. But why did I say it? I was thinking of the evolution. The variations of ourselves and the changes we go through as part of hobbies, passions, life events. Specifically with running, how, after each achievement we become a new version of ourselves. We ‘join a club’ as they say, and become another number who has done something specific.

What are those version of ourselves for running? It could be anything you want really. It could be based on distances, emotions, achievements, memories, ambitions. Absolutely anything. It is unique to you and not defined. Thinking about Nick, and the running we’ve done together in the last two years, the versions and transformations I imagined were: