Run Free. I love this phrase. One I often refer to when I think about running – its exactly how I want my mind to be when I run. This time though it has a different meaning. A more literal one! Maverick and Tribe collaborate for an event they call “Run Free”. I’ll do it an injustice when I say it is simply an event of multiple distances (Short, Medium, Long in the traditional Maverick setup) but one for which part of the proceeds go toward charity and Tribe’s 10% Project. Whilst as a community, Tribe push people to redefine their boundaries, in this instance, the Run Free event is in support of ending modern slavery. A worthy cause indeed. 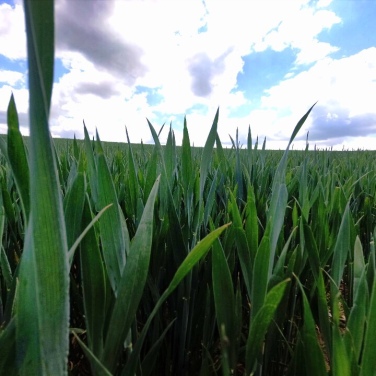 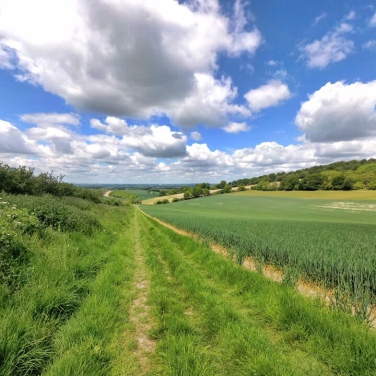 I hadn’t planned on being at the event, but a last minute change of plans meant, come Friday, I had no plans for the weekend. I was on a self-enforced ‘rest’ and hadn’t run in two weeks up until a Run with Nick midweek. Now I had the urge, I couldn’t sustain the rest any longer. I wanted back in to what I love – running. It didn’t take long on Friday morning to come up with a plan. Reaching out to various friends there were options. It came down to a toss up between hill repeats at Box Hill or travel north and volunteer at the Run Free event. Something I want to (and will) do more of. After speaking with Paul, my mind was made up – you could register on the day to run. Perfect. The Run Free event was taking place in a part of the Chilterns I hadn’t really explored. They also had a marathon option. I was sold. The only difficult part was getting to the race event ‘village’ which was annoyingly in the middle of nowhere.  Time to form a plan.

My plan was simple and a little stupid, but its how I think – I could get the Oxford Tube to Lewknor Turn. From there I could run the 5 miles to the start. I’d repeat this on the way back unless I could bag a lift off someone… The Oxford tube is great. It runs 24 hours a day, is fairly frequent and pretty cheap. I used it when I went to the Race To The Stones a few years back so could picture where I needed to be and get off. And so, with a 4am wake up call, I was on my way. 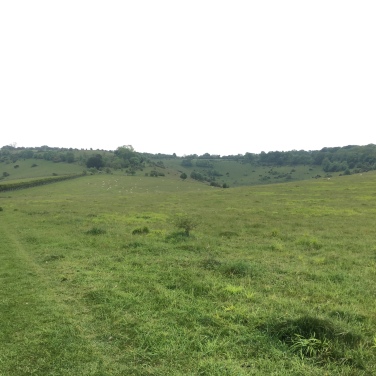 I got off the bus at 7:30 which left me an hour until registration opened and a further hour until the race would begin. enough time to chill, relax and prepare. Those first 5 miles though, they were a little hilly. I covered almost 1,000ft of elevation (a third of the marathon’s elevation gain!) before I’d even begun the race. Taking about an hour, I did think to myself ‘see, this is why it is silly!’. Anyway, I got there, most of the run to the event was on trails and narrow country lanes. It was all good. Arriving into the event I was greeted by Hannah (of extreme endurance event fame and whom I first met out in UTMB last year after she sped across the TDS finish line – so impressive!). I was a bit spaced out and immediately snatched a tribe bar out of her hand and started feasting on it – I was famished from the early wake up and run. How rude I was – sorry Hannah! I went off to register and was greeted by Sarah and shortly after met Paul, Ben and Vanna among many others.

The Maverick events are a bit of a cult phenomenon. They are incredibly well organised and great fun. I knew I’d see friends and familiar faces there and I sure did – There were so many people I knew there. I hadn’t even registered and I was bumping into people and chatting. As much as I say that I don’t like people, I do love the community spirit and vibe that running has. People from all different groups, people from all different places and ways of life, coming together for the love of running. It is a very inclusive community!

Pre race involved a fair few selfies with the various groups before Ben led a quick warm up for the runners. I joined the starting pen with Elis who was there with Melissa who lives around the corner from me. See, it really is a small community. As the Maverick bell was rung and the race started I ran passed Yvette who was also there volunteering. The connections were endless! The start saw us all bumbling downhill, fast! It was steep. It was lumpy. We were jumping and hopping rather than running. The ground was uneven and as with any race there was a mad dash for the best line/route down. I let gravity take me and sat comfortably with many runners in the middle of the pack. Before long though we came to a grinding halt.

The path diagonally crossed some fields and there was a stile to climb. It created a big bottleneck as we waited patiently to cross one by one. I say patiently, that was until a bunch of Dickheads thought they were better than this. That they don’t need to wait. One by one a group of them started climbing the barbwire fence. I find this so disrespectful and unnecessary. Yes, perhaps the different races could have been staggered to prevent such a bottleneck, but don’t be a dick. That’s someones property. It is there for a reason and no one wants to tend to your sliced bollocks if it all goes wrong. What does a few minutes of waiting really mean? Get over yourself! Anyway, rant over…

The route was glorious. I’ll try not to type about it all in the way I usually drone on about mile after mile, but it was so open. Lush green colours of various shades constantly surrounded us and huge fields and rolling hills were the delights for our eyes. I spent much of the initial 10km or so near Vanna from Wild TR before our routes split us into different directions. Passing through the first checkpoint I met two familiar faces in the Maverick Trail Division Ambassadors that are Paul and Spencer. These guys are fantastic. Ultra running nutters of the best kind. I first met Spencer in the drunkenness that is the after party of UTMB. Like Hannah, he’d also just completed the TDS, a phenomenal achievement. He also suffered a Stress fracture earlier in the year before recovering and going on to break a sub 3 hr marathon in Newport a few weeks ago! He wasn’t running today as he was volunteering, but he ran with Paul from the first checkpoint to the second after his assistance was requested there. Paul I’d chatted with for a while before we briefly met at the Dorset Coastal Trail Ultra. I say briefly because Paul had to leave asap. Like me he has a little addiction to running. Unlike me though, he runs EVERYTHING. He left Dorset that day to get home to run the Hurtwood 50km the next day. This weekend he was running the Run Free Marathon, the Westminster  Mile and the Vitality 10km. Whilst I was also running the WM mile, the difference being He boshed out an impressive 5:15min mile. I opted for a far more casual 9:47min mile! He is a machine.

Anyway, they set out from the aid station shortly before me and I spent the next 10km playing catch up. They were always in my sight but, other than a short stint chatting with Spencer, they were too far away from me as we roamed through forest paths and the rolling hills. This was for many reasons, mostly because they were running at a pace I just couldn’t keep up with. Despite being itching to run, 2 weeks off did have me feeling a little lethargic and ‘out of shape’. It was manageable though. What wasn’t manageable was when I rolled my ankle after about 6 miles. It fucking hurt bad. Usually ankle rolls are terrifying and quickly forgotten. This hurt though. The pain lingered for the rest of the race and beyond the day. My ankles are my biggest concern and weakness at the moment. They’ve taken an absolute pounding over the last 18 months. June will be hectic on them (5 weeks of back to back marathons, mountains and ultras lay ahead culminating in the beast that is the 120km Lavaredo Trail in the Dolomites!), so perhaps July will be another attempt at some time off…

Anyway, I’m blabbing. Checkpoint two came and I said good bye to Spencer. Paul, free of chatting, soon vanished into the distance and I carried on. It was a good but tough day. This is the perfect sort of training run for me. Besides being well supported, sign posted and through stunning parts of the country, my own run became a challenge. Physically and mentally. The toughness of the course and concern for my painful ankle put me into the dark parts of my mind. Parts I need to visit from time to time and deal with. Parts I need to make peace with and get comfortable being consumed by. You don’t want to visit these places alone on a mountain partway through a day long ultra without being prepared to deal with them. Perfect mental training, building your strength of character.

As the midday heat intensified, I was running (very inefficiently I might add!) down a long trail track. At the end I could see the mass of energy that is Emma. Another Volunteer and someone I’ve seen at many races and other running events over the past 18 months or so. Along with Jay, she was the third and final check point. This was a mini heaven. I stopped and chatted and greedily consumed loads of the food (sorry everyone!). As I did so, another face appeared – Gwen. We’d met a a run several months earlier and did the whole “hey!!” kind of thing before later asking each others names again. We pretty much ran most of the last 10km together, with Gwen out in front and running strong to a finish a few minutes ahead of me.

Before the finish though was one last, badly kept secret – a steep hill. The initial lumpy downhill we ran, we had to now climb back to the finish. Whilst I’ve certainly done longer and higher, it was not easy. With the windmill up at the top as the marker point I proceeded to climb and my calves screamed out immediately. It was a burner for sure. Then it was over, running across the line Yvette smashed me in the face with the finishers medal and gave me a beer. Paul was there along with many others including Hannah who helped me refresh and served up the nutty Tribe protein shakes. 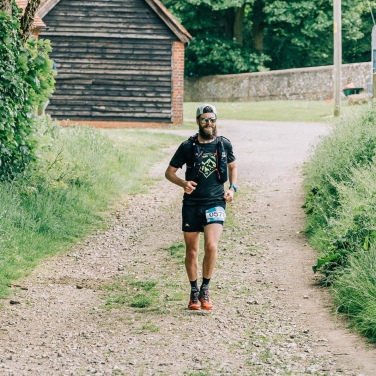 I spent a short while repacking, getting ready and chatting away with various people before I managed to blag a lift back to the bus stop from Elis and Melissa. Perfect. They day couldn’t have been any better. A last minute plan, perfectly executed. Thanks guys! 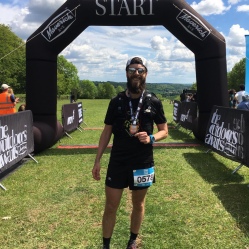 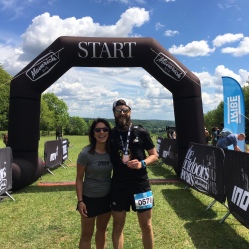 It was an absolutely fantastic day. As always, the Maverick events are impeccably organised and the volunteers are incredible. The whole atmosphere the organisers manage to create is something special, never mind the festival-esque vibe they created at this special event. If you want to sample trail running races, this is the company to do it with, you won’t regret it!