6:30am and the alarm clock is buzzing. As they day dawns, so does the realisation that I know get up earlier on weekends to go running than I do in the week for work. What has happened here?! I’ve plenty of time before I need to catch a bus so I leisurely have breakfast, prepare my bag and start to wake up. I’ve time to spare and I’m waiting outside for the bus when I realise I haven’t got my running hat. I need my hat! I don’t run without a hat anymore now. I find the wicking of the sweat, the sun protection and generally the keeping the hair out of my face a bonus and one less thing to think about when running.

I run back up to the flat (fortunately the bus is a moment from my front door, grab it and am back down waiting with a minute to spare. The bus doesn’t come. Shit. It must have been early. Now I’m touch and go whether I’ll make the connecting train. Great. Morning stress and panic that wasn’t necessary.

I do make the train on time (thankfully quiet Sunday morning roads!) and walk the carriage until I find the noisy bunch of excitable runners dressed similar to me. Salomon hydration packs are everywhere! I join up with a few familiar faces (Jana, Yvette, Giffy, Suzanne and Gwyn (the yappy dog!) and meet some new faces – Maggie, Stefano, Vanna and Jakub. We’ve an hour on the train until we reach Eastbourne. Jokes and laughter are shared and the customary ‘Before’ black and white headshots taken.

We bounded off the train and straight into the run as soon as we left the station. Stefano helped me set up the navigation on my Suunto Ambit3 as, once again, I’d failed to even attempt to understand this watch and how to use it. I’m still struggling to come to like it. To embrace it I’ll need to step away from the familiar convenience of my Garmin Forerunner, and I’m just not willing to do that yet.

The first stretch of the run is down to the coast and along the sea front to the South Downs Way path at Beachy Head. I remember this from a previous run, it’s a steep incline to start but it rewards you with fascinating views of the Coast and Eastbourne. We could see the end goal, Brighton, in the distance. A mere shadow on the Horizon. It looked a long way off… 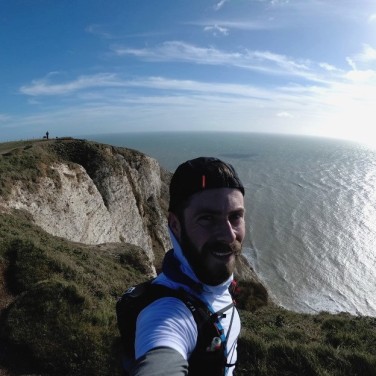 Following the coastal path we ran towards Beachy Head Lighthouse before hitting the Birling Gap and Seven Sisters – series of seven chalk cliffs on the English Channel. The sun was shining bright and the light on the white cliffs was mesmerising. As too were the sudden drops and ‘up and unders’ we’d run for each cliff. The Wind was blowing strong and we were struggling to speak to each other as there was no protection given we were on the coast. So we all followed up and down the cliffs, walking where we had too. Some of us having more fun than others – Yvette rolling down a hill being a prime example. A heap of photos were taken, it would be foolish not to record these memories!

As we progressed further along the coast, the group split into two and we lost sight of a few of the runners. We needed to loop inwards at Cuckmere Haven (as the tide was in enough to prevent running along the shore) and around the Cuckmere river via the road. As we reached the coast again and started to climb the hills, the group reformed and off we went.

It was around this time, after a few hours of running, that many of us were starting to feel the effects of hill running in the wind. It’s tough. Naturally with it come the aches and pains and the niggles as well as those demon thoughts that start to beat you down. It isn’t a nice feeling. My own physical complaint being a bout of sciatic on my left side. I had it once before and it flared up earlier in the week. I’m not sure why, either as a result of over training or being knocked off my bike one night. Occasionally I could feel the pain depending on the angle my left foot was making as it hit the ground.  A few of the group decided they’d power on until Newhaven and then leave us to carry on. They’d meet us in Brighton later for the journey home. 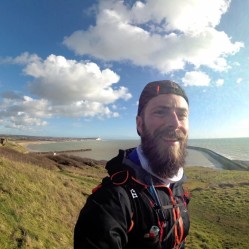 For me, the run across Seaford was a right bitch. After hills and trails, running on the concrete path, flat, with a clear view into the distance, was a struggle.  I was so glad when we reached New Haven. Again the group had separated a little but reformed at Newhaven station where we said good bye to those stopping and welcomed David who joined for the next 20km.

Food was consumed as we strolled up Fort Hill for yet more amazing views, and to welcome back the wind. The next stretch of the run has become a blur for my memory. I was in and out of phases of joy and phases of darkness, wishing the run would end. I get this quite a lot on long runs and presume so many others do too. You find a way to block it out and keep moving forward. It’s times like this where it is great having company even if you do not talk to those around you. Taking comfort in knowing you are not alone and there are others there to keep you motivated.

Somewhere near Peacehaven we were joined by Sarah. She was running into Brighton and recognised a few faces from some of the North Face’s Never Stop London Trail sessions. She joined us for the last stretch. It was great talking to Sarah as we ran, she pointed out various points of interest to me and gave me an insight into some of the history of the coastal path (her parents live in Brighton).

Passing Saltdean we headed down onto the Undercliff Walk. Like before we were once again on flat, hard concrete ground. A clear view of Brighton in the distance. We could see the Marina which was pretty much the end goal. Sand being blown in our faces, it was head down and power through. The end was near. We hit the Marina and carried on down to the Pier. Regrouping at the Aquarium. We were done. Smiles and hi-fives all around.

A few of us headed off for some Fish and Chips (had to be done!) whilst the rest headed to the pub to meet those already there. We all then headed off to the train. The ‘after’ headshots were taken and the journey home filled with laughter and reflection. Next stop – Hot Bath! 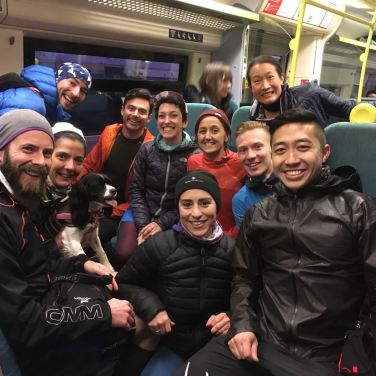 Thanks Cool Cats! (and credits to them all for the photos!)