I’ve always loved a good sugary doughnut (A jammy bastard from Sweetmans Bakery back in the day were the best ones!), so when I came across the @dougnut_run_club on Instagram, I knew I had to get involved. Doughnuts and running, yes please.

The shout out was done, Saturday 25th November, a group of like-minded sugar fiends would be meeting at the Tate, running a 5km route to the Doughnut Time on Shaftsbury Avenue. Here we go…

I was in good shape off the back of the Lisbon Marathon and had continued my running (January and the 2018 challenge would be here sooner than I’d like). I was out for a long run so decided I’d run to the meeting point, do the 5km and then run home also. I had a plan.

I rocked up at the Tate and hung around until I spotted a few other runners who looked equally lost, how exactly do you approach someone and ask “are you running for doughnuts?”. But I did. Intros done and we were on our way. The route was planned and we headed across millennium bridge, along the embankment, into St James park and into Soho.

Chatting away it was great to get to know fellow runners, find out about their experiences and stories and also find out the back ground to the run club – a few friends, after a run, went for a doughnut and were challenged by the seller as to whether they should be eating doughnuts. So they thought, feck it, let’s run specifically for a doughnut next time. And they did, then others joined them and it grew from there. Such a friendly bunch with regular runners, ultra runners and newbies to the running scene. 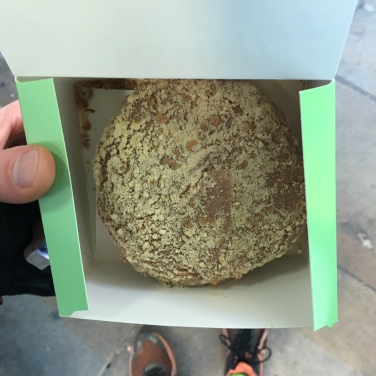 The doughnuts themselves were sickly good (I had a honeycomb crepe number), although I don’t think any doughnut is worth a fiver! Give me a 5 pack from Sainsburys for 90p any day! I’ll certain run with them again and eagerly wait the next time I can join the guys.

After a coffee (and a warm up!) we headed our separate ways. For me, another 8 miles or so home to round off a 20 mile trip.