Last year I ran the Race To The Stones as my first real trail event. As I look back, I loved it. Besides the trail and the day and event itself, I loved how well Threshold Trail Series had organised it. Besides the stones they organise a Race to the Tower and Race to the King trail series. So I signed up to the other two (ok ok I also wanted the ‘free’ hoody!).

I’ll ignore the training for this run as, like the last few months my training has all been unstructured and just involved running when I feel like it, no pressure. Just running. A lot of running. What I will mention though is the logistics. Threshold Trail Series put on a number of shuttle bus services for their events, however for the Race to the Tower, the services weren’t what I expected. In short, I couldn’t easily get to the start and,  once finished, there was no transport to the nearest train station. So to my annoyance I had to book accommodation nearby the night before and (being a tommy-tight-pants) predict my finish time and book a train (an taxi to the station) at the end.

The night before the race I stayed a few miles away in the village of Stonehouse. A picturesque little place on the Cotswolds Way. The room was in a characteristic looking pub. That should have been my first learning! Don’t book a bed in the only pub in the village the night before an ultra. The local Friday night ‘Sparta’ wannabes were out in their numbers. This was Stonehouse. Not Sparta. No matter how many times they screamed the quote from the movie ‘300’ the joke never got old. And I never got to sleep…

I woke early on the morning, had my breakfast and jumped in the taxi to the start. I collected my gear (Hoody and Tshirt for doing more than one of the series) and I was good to go. The race director was hyping up the first wave, we had our briefing and instructions, given insight into the 160 gates/stiles and landmarks awaiting us on the run. Then we were off.

Single filing through he first few gates I soon spotted Ged. Someone I’d been chatting to on Instagram. We said hello and started chatted as we ran. The short story of a long story is that we ended up running 33 miles together! That’s a good 6 or so hours of running and chatting so you can imagine we covered a lot of topics along our journey. For me this is the perfect example of the community of running on the trails. You meet people and get to know them, sharing everything along the way. You don’t get that road running!

The first section of the course was, I felt, fairly flat with a few lil’ hills. All very runnable I thought. Within what felt like no time at all we were at checkpoint one, it was about 5 miles in to the course. Ged’s family had come up with him but weren’t at the checkpoint as expected. As he was joking that they were probably still asleep and now in his bad books, across a golf course his kids came bounding. Sweaty hugs dished out, we carried on and were soon welcomed with more of a hill. I challenged the hills. They didn’t seem all that big to me. It would be something I’d repeat over and over. “Call these hills?!”. Checkpoint two also soon came about and the first very much anticipated dose of flat coke. You just can’t fault it on an ultra! As expected, the volunteers at each checkpoint were awesome and upbeat. Threshold really do such a great job. I new this, I knew the checkpoints would be stacked not only with enthusiasm, but with treats and goodies everywhere. And I was taking advantage, I was collecting an unnecessary amount of food at each checkpoint. I knew I’d do this. I can’t resist being a greedy bastard. 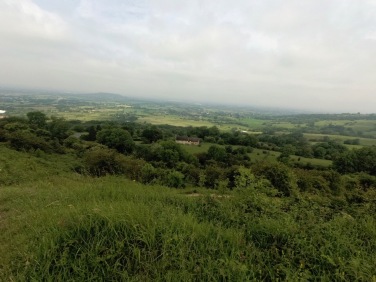 With each subsequent climb we were treated to amazing views of the Cotswolds. Having someone to chat to makes such a difference and we both felt strong as we happily ran between the inclines and hiked to the view points. Such a good time we were having that we were physically having to remind each other to eat and drink. Checkpoint three came and went and the heat of the day increased as we approached midday. It was getting very hot and very very sweaty. The heat wasn’t helped by the humidity of running through so many ‘forest’ paths. I hadn’t realised that the course would be this diverse and was loving running amongst the trees. Except, I kept rolling my left ankle. After the first few times it started to get very annoying. This was the downside of tree roots and the uneven-rocky path. It was beginning to frustrate me and I started to verbalise it as it did actually hurt each time. My mind was soon distracted though as Basecamp was approaching and the oportunity for a slightly longer rest. 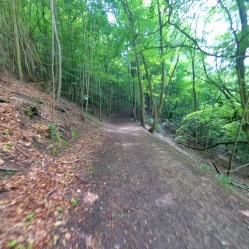 We opted to avoid the full base-camp experience, and instead of going to the full on food court and pasta and taco buffet just to grab some food from the ‘run-through’ pitstop set up for the non-stop runners. Whilst Ged spent time with his family, I stocked-up (overloaded my bag more like) on the free food and changed my T-shirt from my Evossi Elevate to WTR  Salomon agile. I’d always planned to do this for a bit of a mental boost. I love the Elevate. It’s so functional. But with the heat, the thinner Agile T would be much quicker drying. Something I’d welcome in this heat.

Re-fuelled we ploughed on and I soon rolled my ankle again. Ged suggested getting it strapped. A wise idea. At the next check point (number 5, beautifully contained within a barn!!) I asked the medic for assistance. Knowing strapping wouldn’t stop me rolling it, it would give me the pseudo-effect needed. My mind would be a little more at ease feeling the tape on the ankle. James happily obliged, strapped me up and gave me some sun cream also! Back out we went.

We’d overheard that the elevation of the second marathon was a bit different to the first, and it was true. There were less inclines in the second half, but the four hills we needed to climb were bigger. A good 500ft elevation on each. With one done, as we hit mile 33, I was feeling good and kept running. Me and Ged said our goodbyes and I continued onwards. As the miles ticked down, I realised I needed a Paula. Yep, a Radcliffe. It was the focus I needed to keep running. I knew there would be a pit stop within the next 4 miles or so so I didn’t stop. But neither did my gut. It was getting touch and go when the Checkpoint 6 popped into sight. Running through the gate I was heading straight for the portaloo!!

What a weight lifted. Literally. Is stocked up on water, Reloaded the isotonics, stashed yet 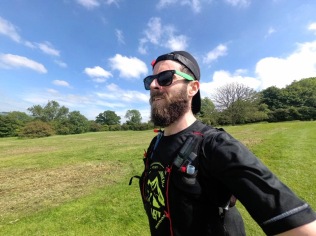 even more free food and was back on it. Now alone, my thoughts started wandering into competition mode. With the acceptance that the course was now less undulating, more flats between the hills, I wanted to run. So I did. As long as I felt good I set out with the intention to run between the hills. I also had one eye on finishing with enough time to relax before my taxi was due. I also wanted a shower badly. The amount of sweat was, well, stinky.

I felt strong though and passed a lot of runners. Chatting to many before carrying on my way. Before I knew it there was just a half marathon to run. A very doable chunk. It all becomes a blur at this point, but I do remember the amazing tree. The Purple one and the desolate looking one behind it. What a sight! The trees on this route were something else.

Pit stop 7 came about and with it came the best flat coke. The best. I don’t think it could have been flatter nor warmer. I couldn’t get enough. I think I had five cups. A chat with the girls holding the fort (huge shouts to the girl, whose name I forget, who came down from Scotland to volunteer!!). I was surprised, but chuffed, to see a sign saying 5 miles to go. It felt like there should be longer left to overcome. This last stretch was all down hill then flat before the final mile all uphill to the tower. So really I had about 4 miles to run! This realisation was a massive boost. I set off passing more runners along the paths before rocking up in the town of Broadway. The locals were all out in good support (in fairness everyone encountered throughout the day was brilliant!) and I shared a few laughs with those enjoying a some drinks on the high street as I played up to their cheers. I’ve always got some energy to interact with people along the way. It just puts a smile on your face!

I entered the final fields, the final hills. Sheep everywhere. Only one way to go. Up. Straight up. And up I went. There was one more person in front of me someway up the hill. I soon caught up with them though as they stopped for a rest. Checking they were ok and good to finish, I carried on. Rising up through the last gate to be welcomed by claps and cheering, the cowbells ringing and the locals cheering me on for the last few hundred feet. round the last turn and into the finishing zone. I was done. A double marathon and over 7,000ft of elevation gain complete. it was time for shit food and a baby-wipe shower.

Job done. To the tower I ran.

Looking back at the splits, I positioned 64th on the first 26 miles and 16th on the second half. A good indication of how much stronger I ran the later part. To say I’m happy with that is an understatement!.