I first came across this group after seeing some posts on Instagram. I for one happen to enjoy a good burger (who doesn’t?) and the thought of combining it with a run (a substantial 13 miler at that!) certainly caught my attention.

From what I gathered, this was an open invite to whoever was interested, but that a core group of friends, who met through Instagram, were always in attendance. Whilst running the ‘Big End of Year Run’ (LINK) I recognised a face from Instagram and it turned out that Tommy was the brains behind the Burger Run. I promised to join the next run there and then. Two week later and it was burger run time!

I’d convinced Alex to join me, knowing he has a taste for calorific food (Sometime I’ll tell you about his Pizza escapades) and I rocked up at Hyde Park corner early on the Saturday morning. As I’m walking into the park I meet Mel and we do the whole ‘are you looking at me looking at you wondering if you’re dressed in running kit to go get a burger’ kinda thing before introducing ourselves and walking to the meeting location. There were a group of runners already inside the café and we go in and begin more introductions. Mel knew a few people from previous runs she’d attended, whilst I instantly recognised another face from Instagram – Em – who I’d briefly chatted too after one of her posts led to me signing up to the Brecon Beacons Ultra Trail later that year. Alex soon appeared and some more connections were made. I also met Bex who I’d come to know through the Never Stop London training sessions and we both did the “what are you doing here?” thing (there’s a lot of ‘things’ in running I’m starting to realise as I discover how close-knit the community actually is when you break away from being a lone-runner).

Tommy ushered everyone outside, gave a little speech and explained how the run was going to go down. Basically different pacer groups with two pacers familiar with the route. Go where you feel comfortable enjoy it, don’t get run over and see you at the burger joint. One of the pacers (Dana) led us through a quick little warm up and off we went.

On this occasion the route saw us loop through Hyde Park and Regents Park before joining up to the canal path which we’d pretty much follow then past Victoria Park and Mile end towards Limehouse. From there we would loop back along to Tower Bridge and the end point, this time GBK. 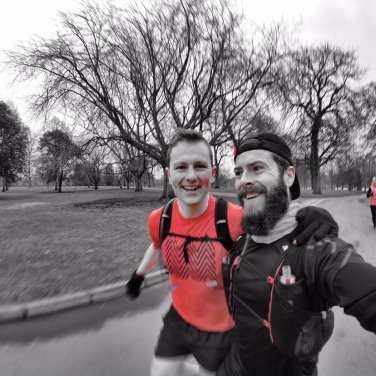 Alex and I joined the 9:30 – 10:00 mile pace group. We were a group of about 10 people and most of the run was spent interchanging and chatting away with each other, getting to know each person’s interests and backgrounds and running stories. Despite the time and distance there were certainly a few people I didn’t spend much time saying hello too and something I’d have to rectify next time. Interestingly there was one woman who had joined us in Hyde Park as she was running, she tagged along and left us at Victoria Park. I liked that. It showed how open and accommodating the group is.

We’d stop from time to time to regroup and to make sure everyone was hydrated and fuelling their runs. My snack choices this time were nuts and biscuit combos, fruit winders, dried pineapple and some Babybels. Cheese on a run is something I’m a big advocate of. When you can’t handle any more of the sweetness and you need something salty….cheese it up! 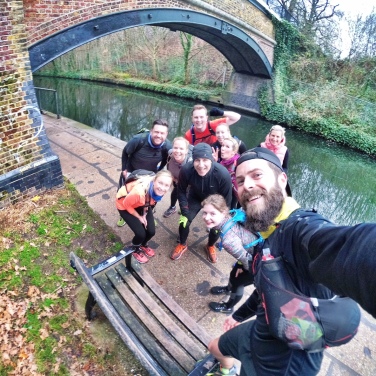 As we were winding through Tower Bridge and ending up at London Bridge, I agreed to run a few miles extra with Tasha who was looking to get a 16 mile long run complete in preparation for her place at the Tokyo Marathon. So jealous. As we left the others to walk to the restaurant, we continued, slaloming our way through the Saturday tourists along the Southbank. We nipped across Millennium bridge and looped back over London Bridge at which point we noticed our last two miles were at a faster (near 9 min mile) pace. Dodging tourists is good training!

When we got to the restaurant, there was no one there. Something was wrong. It turns out that we’d (the whole pace group) had led ourselves to the wrong GBK and we should have been at Tower Bridge. Doh, those extra miles could have been achieved running back to Tower Bridge rather than further away. The short walk back felt so much further than it was. Rocking up at the restaurant we were joined by the last pace group and several other friends from the group who couldn’t run on that occasion.

Another thoroughly enjoyable day, getting over the insecurities of meeting people, putting myself into social situations I’m not always comfortable with (I prefer smaller groups) and putting so many names to faces recognised from the internet. I’d recommend the run to anyone and will certainly be back for more next time!